Failure analysis (FA) is the process of determining how or why a part has failed. This is often performed as a series of steps known as FA techniques. A failure is defined as any non-conformance of the device to its electrical and/or visual/mechanical specifications.

Failure Analysis is necessary in order to understand what caused the failure and how it can be prevented in the future.
Failure analysis starts with failure verification. It is important to validate the failure of a sample prior to failure analysis in order to conserve valuable FA resources. Failure verification is also done to characterize the failure mode. Good characterization of the failure mode is necessary to make the FA efficient and accurate.
After failure verification, the analyst subjects the sample to various FA techniques step by step, collecting attributes and other observations along the way. Non-destructive FA techniques are done before DPA Destructive Failure Analysis. Also, the results of these various FA techniques must be consistent or corroborative. Any inconsistency in results must be resolved before proceeding to the next step. For example, a pin that exhibits a broken wire during X-ray inspection but also shows an acceptable curve trace during curve tracing cannot happen, so this inconsistency must be resolved by verifying which of the two results is correct.

In general, the results of the various FA techniques would collectively point to the real failure site. The FA process is finished once there is enough information to make a conclusion about the location of the failure site and cause or mechanism of failure. 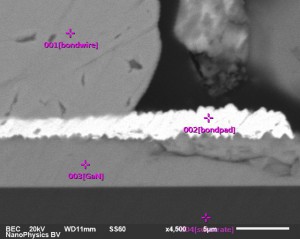 We can distinguish:
Failure Mode - a description of how a device is failing, usually in terms of how much it is deviating from the specification that it is failing, e.g., excessive supply current, excessive offset voltage, excessive bias current.
Failure Mechanism - the physical phenomenon behind the failure of a device, e.g., metal corrosion, electrostatic discharge, electrical overstress.
Root Cause - the first event or condition that triggered, whether directly or indirectly, the occurrence of the failure, e.g., improper equipment grounding that resulted in ESD damage, a system problem that caused the usage of an incorrect mask set.

We offer you the following Failure Analysis techniques:

View all posts by: Tim

You can find out more about which cookies we are using or switch them off in settings.

This website uses Google Analytics to collect anonymous information such as the number of visitors to the site, and the most popular pages.

Please enable Strictly Necessary Cookies first so that we can save your preferences!